» cloth-wrapped USB Cables
by LordPentecost Today at 11:52 am

We seem to be down again

I keep pushing for updates but the Mods and everyone else is waiting for Proteus to respond, the only man able to possibly sort this out. Please be patient and maybe try the VPN  getaround , looks like this could last a long time.

Can anyone report on actions taken on GB side?

Mr. Bullet. We've been trying to contact Proteus. We have some theories as to what is happening. The problem is regionally limited to Europe. Von Corax thinks that Brassgoggles.co.uk's host may be using something called "Content Delivery Network," which means that service across continents is divided among several servers. In this case it's assumed some servers are compromised. This means that the software that Proteus uses has nothing to do with the problem, and instead it is the host / service provider who knows whether there is some issue with servers in Europe. What Proteus may be able to do is contact the host/provider to find out if this is the case.

morozow also said (I think) that he had to go through a VPN to hit BG.

Does anyone know if we're using some sort of Content Delivery Network? That's one thing that could account for these geographically-localized outages.

The only one with a solution was Mr. Morozow, from the Russian Federation who successfully circumvented the problem by establishing a VPN, that is borrowing someone else's IP address to establish a network you can access from Germany but is "based" somewhere else, like the UK or US. I have never done it myself, so I can't give you any detail on how to do it, until I try myself. I don't know if that gives similar results to using a proxy.

Ha. I thought it was Russia that was blacklisted.

I had to use some kind of VPN curve.

I've tried using software like Tor Browser / Vidalia (anonymous browsing using an encrypted network of volunteer servers across the globe) to no avail (mostly because when I tried to connect I kept getting only German servers as proxies, which obviously doesn't help - but maybe if you try again you could get another server in the US or UK or elsewhere)...

We'll keep trying to get a hold of Proteus

The Bullet wrote:James told me that someone bypassed this error using a vpn. I have no idea how this might work. Maybe someone could create a link for us.

Here's an article from TechRadar on the best free VPNs, as of a few days ago.

The gist of a VPN is this: You install a VPN client on your desktop, laptop or mobile device. When active, the client intercepts your Internet traffic, encrypts it, and routes it to the VPN's nearest endpoint server, which then tunnels the traffic to an endpoint which is geographically much closer to your destination server.

This can be used to bypass both geographic content restrictions ("This content is not available in your area.") and Content Delivery Networks (CDNs) by making you appear to be close to the server you are attempting to contact; in the latter case, the CDN is fooled into thinking you are closer to the origin server than to any of the mirror servers, and so allows the request through instead of intercepting it.

I think Tor Browser may help. You connect to an encrypted network of proxy servers which are rotating all the time, but when I tried it last month I kept getting only German servers (it depends on the network of volunteers available at the time). That software is simple to use and free to download for any platform. The browser is usually self contained in a directory you can place in your home folder. There's one version for Android too.

"Server not found"... have we got into mischief? 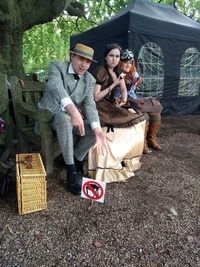 Any news or updates yet?

It's been inaccessible to me for several months now.

Ottens wrote:Any news or updates yet?

It's been inaccessible to me for several months now.

Several of our European members have been difficulty for some time, and have had to use TOR (?) or a VPN to get in (basically, one of those things which sends your signal round the world a few times to find a server that accesses it).

Proteus has been contacted but as yet there's no reply.

I'm not having luck with TOR, so it may mean that all the servers are down. Unless I hear from someone in another continent who says otherwise.

My power was out all day, but as of 6:00 pm EDT Brass Goggles seems to be back in business.

Number of posts : 99
Location : The Wilds Beyond the Deforested City, Canada
Flag :

Still inaccessible here in Spain. (And I don't know how VPN works.)