We Can't All be Airship Captains

Captain Sir Charles A. Lyerly, O.B.T., at your service! No, the "Captain", in my case, has nothing to do with airships. I have been a professional soldier, an Officer for lo these many years now. I have served under some 14 flags (so far), with commissions as varied as Commodore, Bashar, Polkovnik, and Field Marshal. Lancers, Elephant Artillery, Camel Corps, Steam Launch Torpedo Squadron, and so on. I also commanded the first mobile battery of the Dickinson (Winans) Steam Gun against the Turks.

Actually, Captain is a courtesy title, as I am between commissions. I could insist on Conde', or Count, but I am an American, after all.

I do have this idea for an invasion force of Airship Marines, however. The new Dropwings would allow an entire Regiment to be transported, effectively instantaneously, deep within enemy territory; with a whole Airship Squadron, a Division with Cavalry support and Artillery could present any foreign capital a 'Fait Accompli' as it were, and no land-based defensive lines could prevent it.

I'm more diesel than steam, but also certainly not an airship captain.

I am Miss Charlie Twist. Often just referred to as Twist, and no relation to one Oliver.

I'm a wanderer. I've traveled the world, sometimes by pirate ship, some times by merchant ship but mostly by my motorcycle and train. I much prefer land travel than air, though I'm not too fond of sea travel either, does terrible things to my bike, Fang*. When I'm not traveling I live in a large "Garage" that services pretty much anything that can get to it in the middle of the desert. It was here I learnt my trade as both a mechanic and an accountant (only female in the place suppose it was bound to happen). I'm also an occultist of some skill.


*On the road the soul in my motorcycle, Luk Fangare (Fang for short), is my only company. He is both the bikes power source, and security system. He's smart and witty but mouths off a lot. I came across a device in my wanderings that allows his soul to leave the machine and take a physical form. So he will often be seen wandering market places along side me.

Wow, no... I have been a DM in the dim and distant, I have even spent time in the North Atlantic... or under it, as it were. But no, the O.B.T. is the Ordre du Bons Temps, of which I am a member. Not spent time in any tanks, other than the former Iraqi Army tanks which were a bit of a DU hazard at the time.

Sorry to disappoint, though.

I'm a retired Captain, and now a cartographer and time travel agent. I'm also the Navigator on the HMS Gryphon; time travel control being very useful with navigating and escaping.

Silas Morgan wrote:Yeah... but do you have one of these....? 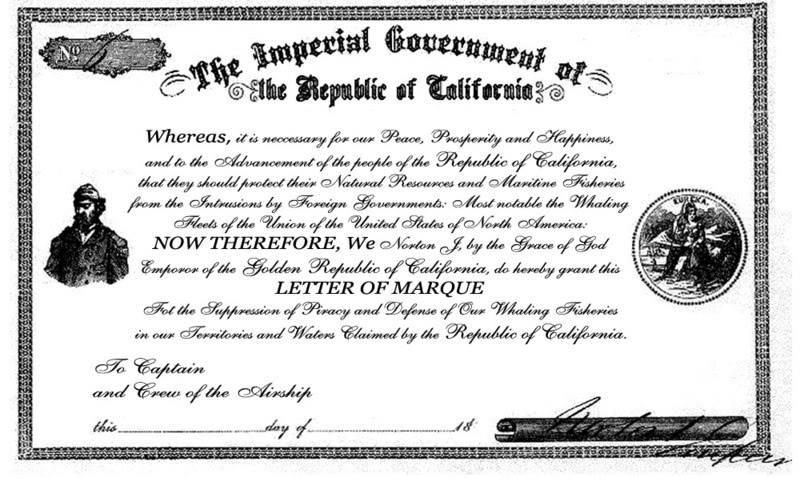 Did you design this? or is there anywhere I could get a copy, as I'd like to do something like this for our Airship Crew?
ETA: Disregard, I found the link a few posts later. Thanks!!

You've never heard of the Aetherborne?!
You can't take my title away from me, I've been using it for over a year!
But I was thinking about the fact that everyone does want to be a captain.

"Who wants to be my Two-Sheds Cabin Boy?!"

Oh, but note I'm NOT A PIRATE!! We are a treasure hunting crew carrying on in the name of Brave Captain Alastair. What an awful man he was.

Steampunk preacher, at your service!

I also happen to be the captain of a stolen airship, but most of my adventures take place in the Wild West and a steampunk-haven Texas, where I also do bureaucratic work as an official in the government.

We hang around the Republic of California, in San Diego county, if you're this far south (or north/west/east). I am not the Captain of this vessal, merely the Navigator.
But stowaways can always find work aboard.

We hang around the Republic of California, in San Diego county, if you're this far south (or north/west/east). I am not the Captain of this vessal, merely the Navigator.
But stowaways can always find work aboard.

Drat...wrong coast.
If you ever steer the vessel towards the right coast, don't be surprised if you need to adjust ballast.

KatarinaNavane wrote:Ah, more explorers, tinkerers, and gentlemen...
The engineers are a practical one, especially with all this gagetry around, but do we have any steampunk butchers, bakers, candlestick makers, printers, teachers, factory workers, tanners, fishermen, merchants, stockbrokers, lawyers?
There are certainly people on here with great skill in making clothes and the like, but does anyone actually take on the persona of tailors, cobblers, and milliners? And why not?

I'm still a rebellious youth, I'll eventually stop traveling and settle down to be a jeweler, most likely.

I may fall into the upper end of what you are looking for madam. I am a travelling chef and guerilla brewmaster. I have explored the kitchens and alehouses of Europe, the Americas and the Far East in search of new flavors, exotic foods, and the elusive ambrosia of Ancient Greece. While I have dabbled in such sciences as alchemy, engineering, and botany; it has all been in pursuit of gastronomical frontiers. My search has lead me to darkest Africa for unknown beasts and into the jungles Imperial India for mysterious spices.

V.I.C. (Villain In Charge) of the Airship, Fallen Angel.

More or less residing within the "universe" of Crimson Skies. But spends most of his down time in the Aether regions, plundering mostly exploration ships or releiving other pirates of "ballast" in order to help them with any damage they may have incurred while making the aquaintence of those who do not right fancy our line of work...

(Cuz ya gotta have a good villain for a good story)

Kedric "Vinnie" Varangia. Farmer and tanner, you've all got to get your leather straps somewhere...

Vinnie also has a penchant for guns of all sorts, and is constantly experimenting with bullets and explosives, good use comes of it in the many raids by the prussian army. Each farmer is responsible for their own defense, owning a considerable armory is a matter of life and death. Unfortunately Vinnie is quite a bit of a pauper, wasting most of his money on strange devices and experiments. Not that tanning and farming makes a lot of money in the first place. The allure of the emerald mines is so much that Vinnie often risks life and limb to brave the treacherous caverns in search of the valuble jewels. IT wont be long before he dies a bloody death at this rate.

Darn, I can't be the captain?

my costume and persona are both slowly coming together. A mercenary airship officer in the employ of the Ottoman empire. age has brought wisdom and technical savy, but at a price!
while he spends more time telling the crew what to do, he could jump in at any position and take over seamlessly. He follows his orders to the letter and expects the same of his subordinates. He won't stand out at a fancy ball or a military parade, but when the ordinance begins to fly, he's the one who stands out among his peers.

that would explain all the scars.

RL, I tend to live the mad scientist role almost too well.

nothing like handing a raygun to someone and telling them "be careful, it's loaded"
especially when they know me well enough to think it might just be deadly to pull the trigger!