Tools we should all have.

Tools we should all have.

Alrighty, first off, I think this topic could help a good number of people, both new to making such curiousities as we are wont to do, and those that are old hands at it. Now that that's out of the way:

Where I used to live, I had access to just about every tool imaginable (benefits of living in an area surrounded by farms while not having farm yourself. And having several relatives who were craftsmen of all sorts), but I was never much into the making aspect of steampunk.

And then I moved to where I currently reside, and I have a severe lack of tools, and I'm starting to get into the making side of our community.

So my problem, my fellows, is that I'm kind of at a loss of the tools I should aquire, other than the basics (hammer, drill, saw, etc.) I know that I need to get a ballpeen hammer, a better saw, a soldering iron, and something with which to cut metal, but what else do you folks think is an "essential" tool of steampunk?

pop rivets
or rapid rivets, whatever you would like to call them.
Along with a pop rivet anvil and setter.

Imagination. That's the greatest tool you could have.

I'm going to put in a vote for pliers. You'll want at least two pairs for both more delicate work than your fingers allow for or holding things firmer than you can with your fingers by themselves.

I have my eye out for an anvil at present, too, but ultimately it depends what materials you want to work with, and what you want to do with them.
As Armored-Rah says, imagination is by far the most useful thing you posess.

From knowing what you want to do you will soon find out what you require to do it with. From there skill follows through practice, and from there you're already flying.

I use these for cutting metal:

They are just called metal cutters, or metal snips or metal scissors or something generic and un-imaginative

Also I strongly advise several pairs of pliers! A crappy pair you dont mind getting ruined, a pair with a pointy precision end and a needle nose pair.

Note: this is what needle nose pliers look like; 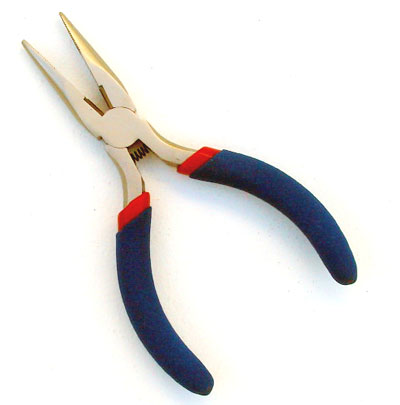 A Leatherman or similar quality pocket multitool. I carry the leatherman Wave, and I use it almost daily. You'll never be able to go without carrying one once you have carried for a while.

Oh, and go for a name brand like leatherman, I've had several cheapies, and the difference in quality is dramatic. a Leatherman is definitely worth the few extra bucks.

It depends entirely on what sort of "making" you are going to do.

For myself I do a fair bit of leatherwork and so I think it is essential to have...

A good boxcutter/Utility knife
A swivel knife
Rivet setters (of various kinds, including snap setters)
A steel rule (or better several of different lengths)
A set square
A mallet (or a maul, or multiples of different weights)
A granite slab
Punches (lots of different sizes)
stitching groovers (one free hand, one adjustable)
All sorts of stamps (Several bevellers, some backgrounders and a couple of undercut bevellers at a minimum. Shaders, seeders, veiners and cams are all useful too)
Needles, thread and a sharp awl

Also useful but not essential,...
A skiver (The one thing on this list that I don't have yet, I use a utility knife)
Edge beveler(s)
Adjustable gouge
Bone folder

And that's just a basic set up... Of course you can get away with a lot less. At a minimum you probably want the utility knife and some kind of implement for pressing the leather in like a spoon handle.

Generally speaking if you have some way of cutting the material then with just a few basic tools you can bend and shape it... It might not be as easy or as professional looking but it can be done.

As for regular tools I carry a Gerber Radius multi-tool, a bunch of screw drivers (about 20 bits) and I can usually deal with what I need to in an emergency.

On the multitool thread: I went through several before I settled on the leatherman wave. among the many, I had a small gerber (clutch), and another leatherman (the juice). the gerber eventually had the torqx screws loosen, and since i don't have a torqx driver set, I wasn't able to use it anymore (the knife blade just flapped wildly). The leatherman juice was great, it was pretty small for everyday pocket carry, but I decided I need a locking blade. I've folded way too many knife blades on my fingers when trying to pry or puncture something with them (you'd think I'd learn [well I suppose I did learn, in that I now use locking blades]). For me, locking blades are a MUST. the Wave has all locking blades and bits.

Is it true you can't carry locking blades in england? How do any of you have any fingers left?

I can't believe no one said...

I too find that a multi-tool is your best friend. I always have at least one on me.

TehZorch wrote:I've found that clamps or a vice of some sort can be the difference between a nice clean attempt at drilling a hole/cutting something and a project wrecking disaster

I suppose that my tool set is not the norm here..

And a few other odds and ends.. All this fits very nicely into the top desk drawer..

VonHart wrote:Is it true you can't carry locking blades in england? How do any of you have any fingers left?

Unfortunately it is true. For everyday carrying, the knife must have a blade under 3", not lock, not flick open, not open by gravity...

The thought of a sharp bit of metal guillotining the ends of one fingers off makes one careful where one puts the blade.

(The beloved has just got himself a new custom folder which is truly scary to close - it is very stiff so you need to have a finger where the blade will eventually fold into to start the closing, then move it out the way before the blade gets to the last bit where it more-or-less snaps shut!)

JingleJoe wrote:
Also I strongly advise several pairs of pliers! A crappy pair you dont mind getting ruined, a pair with a pointy precision end and a needle nose pair.

if you're going to be handling hot metal with pliers, keep a pair aside for that purpose - it would probably be best if it were another crappy old pair.


Oh, and good lighting, that's a very impotant thing, I've got two Ikea desk lamps with 60 watt bulbs, I find them better than a single 100 watt lamp, not so harsh.

And really, really important: a good workbench- I made my own from 2x2 and 18mm MDF- very satisfying!

But don't forget the invisible, intangible toolkit that you carry round inside your head.

You could have access to the best equiped workshop in the world, but without knowledge and skilled application, you wouldn't get very far.

Take the time to master the kit that you have to hand before you dash off to buy something new.

All due respect to Victorinox, Gerber, et al., but "that's not a multi-tool... THIS is a multitool...

No, I don't have any idea who made it - it says "Germany" on the parts, but no maker. No, I don't know where to find another, this belonged to my Great-Great-Grandfather.

I was so glad when I found it again - I had seen it in the house, and remembered it, but it wasn't until I was clearing out the workshop prior to sale that I discovered that it had not been lost.

That's why I purchased an articulated vacuum vise from Harbor Freight. Suction mount can stick to any smooth counter without leaving a mark.

If you intend to do much metal working, there's a few items you will find useful.

A bench grinder with a grinding and a wire wheel,
an angle grinder with grinding, sanding, and cutting wheels,
channel locks, vice grips, cutting dikes, and needle nose pliers,
a hand drill and bits for those hard to reach places,
hammers and an anvil (a rail road rail makes a good one),
a chop saw will make a lot of things easier,
and the biggest, meanest drill press you can find.

For the first few years, I made do with a piece of pine board, to which I screwed a long beech batten about two-thirds of its length along one edge.

On top of that, I screwed another, two-thirds the length of the first.

This gave me a sort of two-height bench stop to press work against.

Then I added a removable vice at one end, that clamped to the board whenever I needed it.

The whole was laid on a rubber mat that I rolled out on the kitchen counter, to stop it from sliding around.

That was my workshop, along with an Axminster mini milling machine on a board mounted on braked wheels, that I could roll under another counter. I ran wiring under the board to power two "goose-neck" mounted work lamps.

A g-clamp I find is quite useful, and obviously preferable in your situation.

Similar topics
» German Mybrute starts. Finally!!!!
» Animation~
» Blunder Chess Tools
» How do I put games in pgn ChessBase? Do you need some tools? Or 7z is enou