Ohhhhhh! You didn't! YOU DID! Soon ALL will know how crazy we all are!

Everything is going according to plan...

Remember the old "Things that proove you're hinged sideways with a screw " thread? Welcome home!

So, to get things rolling. I've been trying to decide which dried animal bits hanging in my barn would make good sideshow taxidermy.

A month having passed, it was high time ...

Ahaha! Resuscitating this thread! Yesss, that will do nicely!
_________________
Bill P, Nul.D. (Unseen U.), Restorer of Old Photographs,
Sexagenarian Boy Genius and SUPREME NERD GOD!!! (score=98!)
Down in the Bear Cave under Cantabrigia Castle, Geekhaven, MA, US

Hmmm... The container full of giant spiders I keep in the freezer? They keep my frozen ferret company (I had her put to sleep years ago, but didn't have the money for cremation). Or my wall of skulls. Maybe that.

Dusza Beben wrote:
Everything is going according to plan...
DB

I read this as "Everything is going accordion to plan" and saw nothing wrong with it. 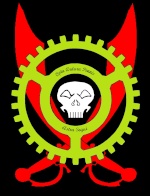 And put in a violin for good measure.

sounds good to me but we need bagpipes,or a xylophone,don't you think?

I have a shaker egg, and can play it like nobody's business!

All good instruments indeed. But useless without a hurdy gurdy!

As seen in another thread here: I wear both a pocket watch and a wrist watch. I also carry no less than 2 additional wrist watches in my bag incase one stops working or I'm in the mood for a change mid day. They're all mechanical.

Mr Clockwork wrote:ALL OF THEM!

And put in a violin for good measure.

And I say there's not nearly enough sax and violins on the Teslavisual Ætherscope!

Number of posts : 101
Location : The Darkest Depths of the Deforested City, Canada
Flag :

I have a fair knowledge of performing with bagpipes or an electically powered bass guitar if so needed.

But you knew that already!

But you knew that already!

Yes, and we're waiting for you to build the life-sized, working model.

I show up to the office dressed in long skirts, a (Neo)Victorian shirtwaist, boots, watch and watch pin, and a fancy dress hat perched on my freshly curled hair, and smelling faintly of roses. For some reason, people keep looking at me oddly....

(I feel underdressed, though, as I've forgot my gloves at home.)

I only wish I knew how those things spontaneously generated... I fear that they may begin to infest homes in the same manner as certain pests or parasites.

The V.A.P. wrote:I have a fair knowledge of performing with bagpipes or an electically powered bass guitar if so needed.

How difficult would it be, do you think, to wire up a set of bagpipes with electrical pickups?

well, bagpipes use reeds to make the noise, so they need the movement of air in order to make any sound. You could easily use a woodwind microphone (or several, rather) to run to an amplifier and wire it up, but it would not be an "electric bagpipe" merely a mic'd one.

That being said, Yamaha does make some electric woodwind instruments as midi controllers, I suppose you could use the same airflow sensors on all the drones and the chanter and get the same effect as a "silent" electric bagpipe, but it'd be expensive.

Of course Roland made an electric accordion, so it may be in the works somewhere. you never know.